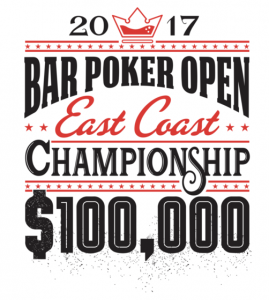 Huge congratulations to G Dull, who runs our South Jersey region, on final-tabling the Bar Poker Open Main Event, finishing third out of over 700 entrants.

G started the final table with 26 big blinds, the third-larges stack at the table. Playing smart, cautious poker, Dull kept his head low while the other players at the table hit the rail one by one until only three remained. 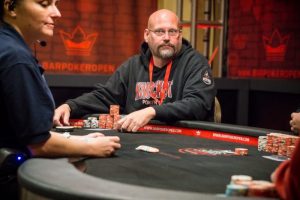 As all tournament players know, you have to eventually win a flip or two. Dull found himself looking down at AQ suited, after Manny Avila shoved 13 big blinds, and Dull correctly snap-called for two-thirds of his stack. Avila showed pocket nines, and it was a classic flip at a huge moment in the tournament. The board ran out with nothing to help Dull and his stack was reduced to about 6 BB’s.

Shortly thereafter, John Beady, who had been playing somewhat loose, opened his button, and G shoved with J8 of hearts. Beady showed A7 of the same suit, so the flush was dead but G had two live cards. The 8 paired on the flop, but two hearts also appeared, so G was ahead but he had to dodge the three remaining Aces and also the seven hearts. The turn came clean, but Beady spiked an Ace on the river to eliminate Dull in third place, with an $8,604 payday.

Dull had this to say after his big accomplishment:

“I would like to thank everyone for their kind words and positive thoughts during our National Poker Championship, I placed 3rd and won $8,604 and now when people say “but it’s FREE poker” I can really explain what that statement DOESN’T mean!
“All this by playing at our local venues and just 2 easy steps to make it to the cash tournament.
“KOntenders Poker Rocks!”

Out of 706 entrants on Days 1a and 1b, 71 finished in the money and sat to play Day 2. In addition to G Dull’s third-place finish, other KOntenders enjoyed deep runs as well, including two others in the top 20. Margie Dailey, also from our South Jersey region, From our Gastonia, NC region, finished 13th, and Terrica Harris, from Gastonia, NC, finished 18th. 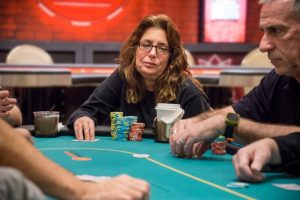