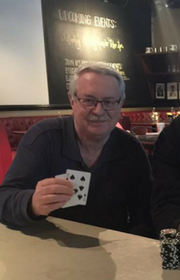 David was not only a respected and loved player in our league, playing almost 500 games, but was also a Tournament Director.

This definitely is sad news. I was more than a fellow poker player with David, he was a friend. I first met him in 2007 while playing WTP. He and I flew to Vegas together in 2009 to play for WTP and he, Diane Hurlbut and I drove to AC to play for WTP also in 2009. I was glad when he came over and started playing Kontenders with us. On two occasions, Robin and I went by his place 2-3 times to take care of his cat Pumpkin while he traveled. RIP my brother. You will be missed. Now you can play the handbells in the heavenly choir as you did in your church.

Very sad to hear this. David was a genuinely great man. He will most definitely be missed.